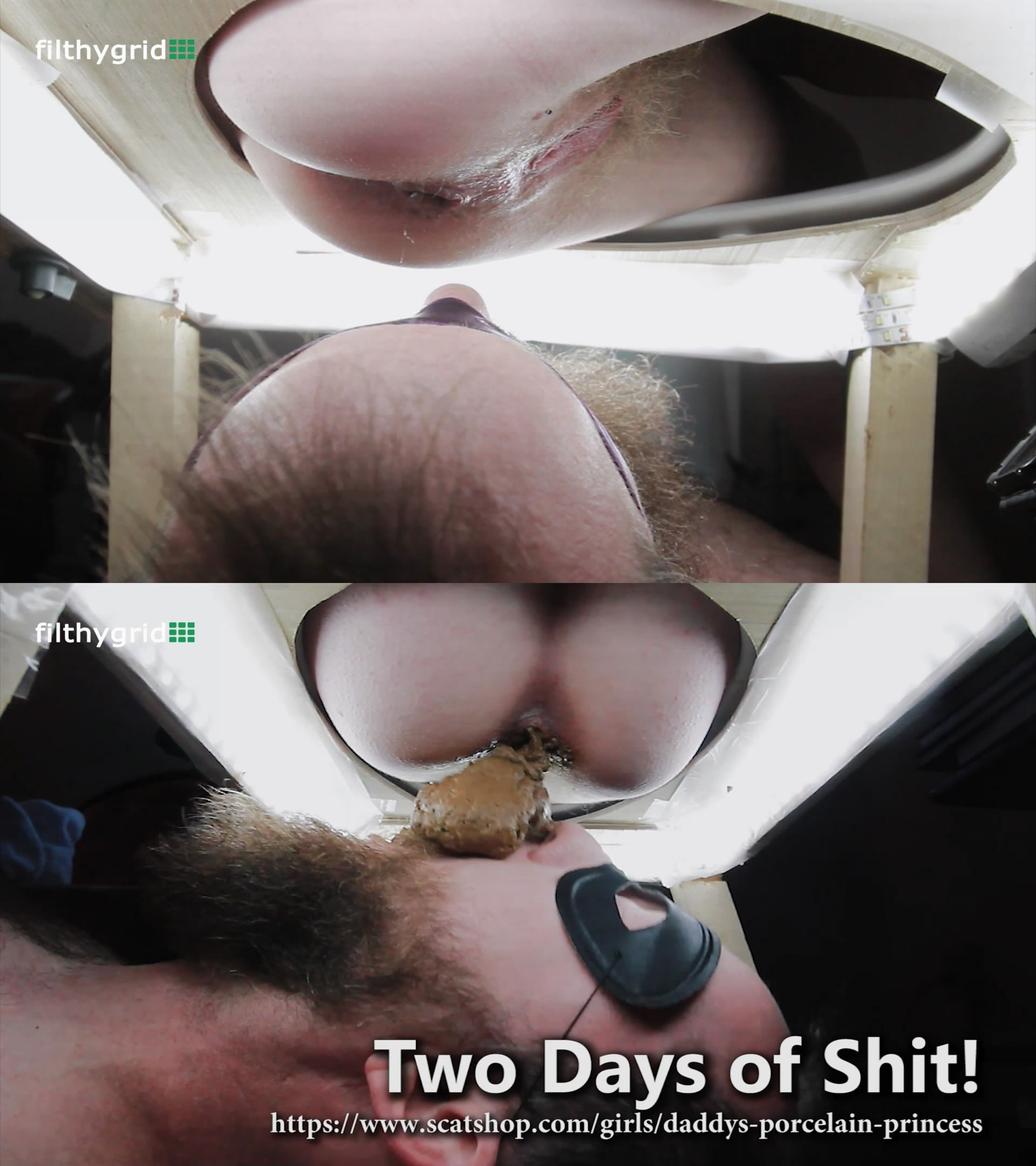 A couple that loves getting messy. he loves eating shit, she loves having her ass worshipped. It’s a good match, and we enjoy sharing our kinks with appreciative folks.

5 Work Dumps
Shitting at work is a challenge, it feels so good to let it out but I have to be quiet. Nice closeups of my shitter opening up, and you know I can’t help but grunt as they force me open

A Quick Shit
After a long date at the buffet, I urgently had to shit when we got home. So urgently, I didn’t have time to set up all the cameras I wanted. This video came out short, so I’m setting a low price to let you see what you’re missing. I start by taking off my panties, and then I tell my toilet about the food I ate. The shit comes big and fast, so it’s over quick. The GoPro is perfectly positioned to capture my gaping, creamy pussy in HD closeup, and you can watch the thick turd stretch my asshole wide. After that I piss all over his shitty face while he struggles to chew my huge load.

Big and Fast
It’s rude to spit out your food! So I am training my toilet to swallow my fresh shit, instead of waste it. This video features an extended JOI section as well as an excellent feeding scene.

Bright Lights Big Shitty
Took a quick dump this morning using my toilet chair. He missed the first part, which was the easy part! Instead of a manageable bite, he ended up with an overflowing mouth. The detail and clarity from these videos has to be seen to be believed! Great quality, you can see every little tiny wrinkle and hear every noise as it bursts out.

Brown Pile of Ooze
I was pretty desperate to shit so we didn’t do anything fancy. Turns out, I had a massive load parked in my bowels, and it completely covers his face as the sludge oozes out. It felt so good, I almost came! My swollen wet pussy leaks grool all over his turd filled mouth. He chews and gags as he struggles to swallow this fresh load of shit. You get to see the action from two angles, in 1080P HD detail with amazing audio. You can hear my ass open up, the wet sloppy sounds of shit filling a human mouth, and more. Every drop of creamy pussy juice is visible as I grunt and push.

Chewing Training
I take the time to walk my slave through chewing on my turds. He isn’t able to swallow it all, but he gets a good amount down. He’s getting better, but of course I’m giving him lots of practice! He chews on these two small shit nuggets for a while before I let him get off. We have multiple cameras rolling, and this video is in amazing 1080p with great audio, too! you can hear my farts and the slippery crackling my shit makes as I unload, as well as see every wrinkle and nugget.

Creamy Pile of Shit
I’m still working through those Thanksgiving leftovers! My slave seems to enjoy them, as you can see from his eager tonguing of my loaded ass. I don’t make him wait long, tho. I fill his mouth with a long, soft turd that coils around his face. He loves it, and so will you! I even used my camera in a special POV so you can see my perspective as I use a human toilet.

Holding It on the Toilet
I waited until I really had to go, then I sat down. It takes a few minutes before I can’t hold it any longer, and in that time you can see my asshole twitch and bulge. In addition, my toilet slave chews on the mouthful of shit for a while at the end.

Let Me Talk You Through It
I get lots of requests for feeding instruction videos, so I decided to make one. Let me know what you think by leaving a review! This is a combination of toilet slavery and JOI! From start to finish, I describe every sensation and everything I’m doing; from how I know when it’s time to when I’m done pushing. My eager toilet slave is beneath me throughout, and I give him plenty of encouragement to chew on my fresh fecal matter. He doesn’t swallow the whole load (it’s massive, btw!) but you can hear him get down a few gulps. As always we have several cameras recording. I love the view from my cell phone, looking down into his mouth while I shit in it! You might prefer the view from the bottom, though. Either way, there’s lots of angles to choose from. Enjoy!

New Things on My Vlog
Imagine if we lived in a world where human toilets were common! Girls would be posting about their experiences online; what would that look like? Follow me as a I share my first time using a human toilet. I act like a first timer, eager to experience this new and different way of emptying my bowels! Fortunately, the toilet is great and swallows every piece of shit I give him.

Pizza and Tater Tots
I ate junkfood all weekend. Despite feeling pressure in my bowels on Sunday, I managed to hold it until Monday morning. My slave set everything up in advance, and good thing he did! I planned on teasing him and starting slow, but this huge turd just wanted out. The video starts with me describing what I ate in detail. Then I sit down on the toilet cam and three different cameras capture every detail.

Squatting in August
In this video I combine two great things, the squatty potty and my toilet cam! I didn’t even know if I had to shit, but luckily I was recording. After a little coaxing, I finally felt a turd starting to edge out. My slave was ready and chomped down on the fresh raw shit. He even manages to swallow some!

Thanksgiving Leftovers Part 1
I ate so much on Thanksgiving! Lots of great food went in to making this thick shit, and I tell you all about it as I sit on my bowlcam. There’s even some footage of my actual thanksgiving dinner spread!

Thanksgiving Leftovers Part 2
Thanksgiving dinner was huge! I have been eating leftovers all weekend, and it’s time to let my slave have a taste! In this HD video, I take a massive shit right into his mouth as he lays underneath me. Three cameras capture everything underneath the toilet bowl rim. I end up taking two big, grunting pushes as he chews and struggles.

That’s a Good Toilet
This one is brief; I just had to shit and so I did! He wanted it in his mouth anyway. I spend a minute talking to him beforehand about it. when the time comes to unload my bowels, I give it all to him. This video has two excellent 1080p HD angles so you can see everything.

The Clean Plate Club
What happens to good boys who eat their food? They get a special reward! I saved up for a few days to make this special breakfast for my toilet slave. You get 2 crisp, HD angles of my ass gaping as I push out this thick, creamy shit. There’s a little roleplaying, but the focus is on my shit going into his mouth. Since he does a good job of filling his mouth, I finish him off by hand. With the sensation of warm, fresh shit oozing around his erect cock, it doesn’t take long before he’s done.

The Cuckolded Toilet
Imagine if you were so worthless, all you were allowed to do was eat my shit. Other men get to take me out, get to enjoy my company, but all you get to do is eat filth. That’s exactly what happened! My toilet got to wait home while I went out and had dinner and a movie. He had instructions to be waiting for me when I arrived, with cameras rolling. Good thing, too! I really had to go.

Trying the New Toilet
My slave brought me a gift! Instead of wearing out my legs squatting over his face, I know have a wonderful toilet to sit on. We decided to try it out, and film the results. We had 4 cameras going! This video captures amazing detail from multiple angles. You will see and hear everything! I even caught the moment when he has an orgasm just from chewing on my shit. We are doing our best to make the kind of toilet slave scat videos we want to see more of! Check this one out and let us know what you think.

Valentine’s Day Part 1
This video doesn’t show my actual butthole opening during the EFRO, so I’m putting it up at a really low price. If you enjoy hearing me talk through a nice shit, you’ll enjoy this one.

Valentine’s Day Part 3
Here’s the final result of two nights of fancy dining and expensive buffets! Watch in crystal clear HD as I unload my bowels right on his face. You can see the corn I ate, and I describe the other meals I had leading up to this lovely holiday. Enjoy!